Fiuoiodomethane is a new type of fluorine methylation reagent developed by Quzhou fluorio Pharmaceutical Co., Ltd. It has excellent activity and easy to use, and is widely used in the development of new monofluoromethyl drugs. CAS No. 373-53-5 can achieve high-purity pharmaceutical grade of 99.8%. At present, the main purpose of the market is to replace fluorobromomethane to prepare fluticasone propionate, such as GSK, and it is also the key raw material of fluticasone furoate. 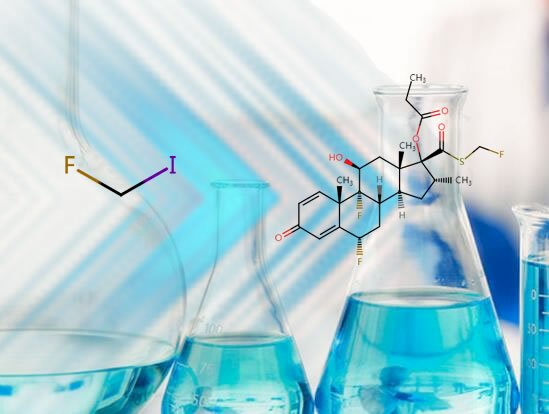 FluoroiodomethaneCAS No. 373-53-5, high purity medical grade 99.8%. At present, the main use in the market is to replace to prepare fluticasone propionate, the key raw material of fluticasone furoate.

Under the guidance of theoretical prediction, the rotational spectra of Ch2fi were recorded and distributed. The exact values of ground state rotation constant, all four, six and two eight times of centrifugal distortion constant are reported. By using the Fourier transform microwave spectrometer and the lamb dip technique, the hyperfine structure of the rotation spectrum is studied in the millimeter wave and submillimeter wave sections, so that the iodine quadrupole coupling tensor and the diagonal element tensor of the iodine spin rotation can be accurately determined. The relativistic effect is proved to be a necessary condition for the accurate prediction of dipole moment and quadrupole coupling constant, and is explained by the direct perturbation theory and the spin free four component processing based on Dirac Coulomb Hamiltonian. The relativistic correction of dual polar moment is 34%, and the relativistic correction of iodine quadrupole coupling tensor is 15-16%.
Fluoromethylation. Fluoroiodomethane can react with various nucleophiles (phenols, benzoic acid derivatives, amines, amides and mercaptan derivatives) to form corresponding fluoromethylation products (equation 3). 2,3 however, repeatability problems were observed due to the instability of some fluoromethylation products.

The free radicals of fluoromethyl can be formed from fiuoiodomethane. In the presence of olefins, the product was obtained by multiple addition. However, the observed selectivity is not
High enough to be used comprehensively. Palladium mediated Suzuki Gongcun fluoromethyl developed by rapid capture of flureoidomethan and excessive pinacol phenylborate (formula 4). Fluoromethylated [F] fluoromethyliodide is worthy of attention for the preparation of [18F] - labeled drugs - pharmaceutics. The latter is used in positron emission tomography (PET), especially due to the longer half-life phase of fluorine-18 for carbon-11 (109.8 minutes versus 20.4 minutes). The photolysis of fiuoiodomethane can produce free radicals. In the presence of alkenes, a variety of adducts can be obtained. However, the observed selectivity is not enough for synthesis. The palladium mediated Suzuki miyaara type fluoromethylation reaction was developed by the rapid capture of fluoroformamide using excessive pinacophenolphenylborate (EQ 4). The fluoromethylation of [18F] fluoromethyliodide is of great significance in radiochemistry. The latter is used in positron emission tomography (PET), especially because the half-life of fluorine-18 is longer than that of carbon-11 (109.8 minutes vs. 20.4 minutes). Many new PET tracers (formula 5) were prepared by fluoromethylation of [18F] fluoromethyl iodide. 8 - 11

The preparation of phosphine on the end fluorinated alkene route. It can react with triphenylphosphine to form stable phosphine a, which can be dehydrogenated and halogenated with n-butyl lithium at thfat-78 ° C (formula 6). Then, in-situ phosphoalkane B can react with aldehydes and ketones to form terminal monofluoroalkenes. 1,12-14 when the reaction is carried out effectively (the yield of aldehyde is 52-80%), a mixture of trans and cis isomers is obtained with low selectivity. 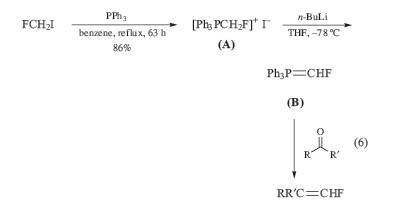 Synthesis of rhenium - α - fluoromethyl complex. The yield of the first α - fluoromethyl complex was 73% (Eq. 7). Synthesis of rhenium - α - fluoromethyl complex. The first rhenium - α - fluoromethyl complex (formula 7), a series of anti-inflammatory corticosteroid analogues, halomethylandrostane-17beta-carbothioester and-17beta-selenocarboxylate, were synthesized in 73% yield by the treatment of strong nucleophilic carbonyl metallic sodium - [(CO) 5re] - with fluoromethane. The new methods for the synthesis of fluticasone propionate were reported as follows: 1) 6alpha, 9alpha-difluorocarbon- 11 beta reaction, 17 α - dihydroxy-16 α - methyl-3-oxo and rosta-1,4-diene-17 β - carboxylic acid (I) and carbonyl diimidazole (CDI) and H2S in DMF generate corresponding thiocarboxylic acid (II), which is selectively acylated with propionyl chloride and triethylamine in CH2Cl2 to generate 17 α - propionyloxy derivative (III). In DMA (III), s-chloromethyl ester (IV) is formed by reacting with ch2brc and NaHCO3, and s-iodomethylester (V) is formed by reacting with Nai in reflux acetone. Finally, the compound was treated with AGF in acetonitrile. 2) Thioic acid (II) was esterified with fiuoiodomethane in DMF with K2CO3.