Introduction to the functional principle and types of lithium battery electrolyte 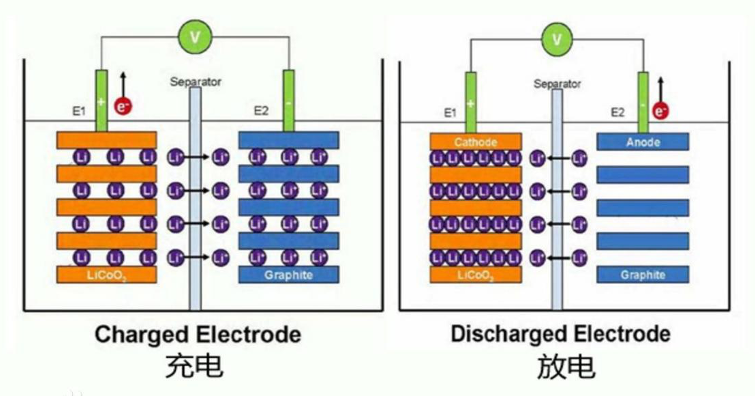 There are many types and functions of additives. In addition to those described in detail above, there are many other functional additives, such as LiBOB and LiODFB and other additives to inhibit corrosion of aluminum foil, and additives such as biphenyl and o-terphenyl to improve the film-forming performance of positive electrodes. , Tris (2,2,2-trifluoroethyl) phosphite (TTFP) and other additives to improve the stability of LiPF6. In fact, some additives themselves are multifunctional additives. For example, after 12-crown-4 ether is added to the PC solvent, it can improve the conductivity of Li+ and use the electrophilic effect of the crown ligand on the electrode surface to make Li+ on the electrode surface. The possibility of the interface reacting with solvent molecules is greatly reduced. The desolvation effect of crown ether on Li+ inhibits the co-intercalation of PC molecules. The SEI film at the electrode interface is optimized to reduce the first irreversible capacity loss of the electrode; fluorinated organic solvents, halogenated After the phosphate is added to the electrolyte, it not only helps to form an excellent SEI film, but also has a certain or even obvious flame-retardant effect on the electrolyte, which can improve the performance of the battery in many aspects.
3. Ionic liquid electrolyte
Ionic liquid electrolyte, that is, molten salt at room temperature, is composed entirely of anions and cations. Due to the large volume of anions or cations, the interaction force between the anions and cations is weak, and the electron distribution is uneven. The anions and cations can move freely at room temperature and are in a liquid state. Compared with lithium-ion batteries, ordinary organic solvent ionic liquids have the following advantages: ①The vapor pressure of ionic liquids is very low, almost negligible; ②Ionic liquids have a wide range of about 300℃; ③Ionic liquids are not flammable; ④ It has high conductivity; ⑤Good chemical or electrochemical stability; ⑥Insensitive to water and air; ⑦No pollution and easy to recycle.
There are many types of ionic liquids, which can be divided into the following categories according to the different organic cations: nitrogen-containing heterocycles, quaternary ammonium salts and quaternary phosphorus salts, etc., among which nitrogen-containing heterocycles include imidazole salts and piperidines Salts and pyridine salts, etc. There are also many types of anions that make up ionic liquids. According to the random combination of anions and cations, in theory, thousands of ionic liquids can be composed.
However, ionic liquid electrolytes also have many problems. The first is that most ionic liquids have high viscosity, which is 1 to 2 orders of magnitude higher than that of ordinary organic solvents, resulting in poor rate performance of the battery; secondly, the compatibility with the positive and negative materials is poor. It is difficult to use liquid electrolytes; in addition, ionic liquids are currently expensive, which limits their large-scale application in lithium-ion batteries.
Reduce the viscosity of the ionic liquid and increase the migration rate of lithium ions in it. It is the ionic liquid electrolyte that can
The prerequisite for commercialization in lithium-ion batteries. At present, there are two main ways to solve this problem: One is to blend ionic liquids with organic solvents or other materials to form a solvent system. The three types of electrolytes formed by mixing ionic liquids with carbonate electrolyte solutions, polymers or inorganic ceramics have received a lot of research and achieved good results. The development of these new systems is expected to promote the practical application of ionic liquids in batteries. The second is to adjust the anion and cation structure of the ionic liquid. Studies have found that the use of ionic liquids with asymmetric structures can help reduce their viscosity.
Four, gel polymer electrolyte
Gel-type polymer electrolyte is usually defined as: polymer as the backbone of the entire electrolyte plays a role of mechanical support, and its network structure enables the electrolyte formed by alkali metal salts and organic plasticizers to be uniformly distributed in the network , And the transport of ions mainly occurs in the part containing the liquid electrolyte. The conductivity of this type of electrolyte is equivalent to that of an organic solution of an alkali metal salt, and can generally reach more than 10-3 S/cm at room temperature. Commonly used gel polymer electrolyte matrixes are: polyacrylonitrile (PAN), polyethylene oxide (PEO), polymethyl methacrylate (PMMA), polyvinylidene fluoride (PVDF), etc. The conductivity of gel polymer electrolytes is also related to the types of organic solvents. Organic solvents such as EC, PC, and BL are commonly used as plasticizers.

1. Sulfone based electrolyte
The sulfonyl group of sulfones has stronger electron-withdrawing ability than the carbonyl group of carbonate, so the energy level of the occupied molecular orbital (HOMO) is lower. The oxidation potential of most sulfone solvents can reach 5.5 V (vs. Li+/ Li) above, it has excellent electrochemical stability; and the sulfone solvent itself has strong flame retardancy. Therefore, sulfone solvents have also been extensively studied in lithium batteries. Based on ethyl methyl sulfone and tetramethyl sulfone (TMS), which have relatively high ionic conductivity and relatively wide electrochemical window, they have good compatibility with high voltage cathode materials such as LiMn2O4 and LiNi0.5Mn1.5O4 . However, the melting point of ethyl methyl sulfone (EMS) is relatively high (36.5°C), and the low temperature performance is not very good. Methoxyethyl methyl sulfone (MEMS) has a relatively low melting point (about 0°C). MEMS-based electrolytes use LiTFSI as the lithium salt, which has a relatively wide electrochemical window, but has poor compatibility with graphite anodes .
Many problems of sulfone electrolytes limit its application: the current synthesis of sulfone solvents is relatively complicated; most of the melting points are higher than room temperature and the viscosity is large; the compatibility with graphite anodes is relatively poor, and it cannot form stable on the surface of graphite anodes. SEI film; and the poor wettability with Celgard separator, it is necessary to use a more expensive glass fiber separator to assemble the battery. Adding film-forming additives or sharing with carbonate solvents can improve some of the problems.
2. Fluorine-substituted carbonate system electrolyte
Fluorine-substituted carbonate has the advantages of low melting point, high oxidation stability and non-flammability, and its cycle performance and storage performance are significantly improved at high temperatures. Many researchers use it as an electrolyte additive or co-solvent for lithium-ion batteries. Electrolyte composed of fluoroethylene carbonate (FEC), difluoroethyl acetate (DFEAc), bis(2,2,2-trifluoroethyl) carbonate (DTFEC) and other fluorocarbonate and conventional carbonate solvents , Usually has the advantages of high conductivity, high oxidation stability, good electrode compatibility, etc., showing excellent cycle performance and safety performance. Fluorine-substituted carbonate is expected to be used in electrolyte solvents for high-voltage systems, but its drawback is that it has poor solubility for LiPF6 and needs to be further improved.
3. Nitrile electrolyte
Nitrile solvents have higher lightning, wider liquid range, higher dielectric constant and lower viscosity. The terminal nucleophilic nitrile group of nitrile substances is the main site of lithium ion coordination, which makes the solubility of lithium salt in nitrile solvents higher, so nitrile electrolytes usually have higher ionic conductivity. The oxidation potential of glutaronitrile and adiponitrile is as high as 8.3 V vs Li+/Li, which is known as the solvent with the highest oxidation potential. Nitriles such as glutaronitrile, adiponitrile and sebaconitrile as a co-solvent and carbonate solvent composition of the electrolyte has higher conductivity, lower viscosity and stronger oxidation resistance, and LiNi0.5Mn1. High voltage cathode materials such as 5O4 and Li2NiPO4F have good compatibility. In addition, the nitrile electrolyte also has excellent low temperature performance. However, the compatibility of nitrile solvents with the negative electrode is poor, and it is necessary to use carbonate as a co-solvent or use film-forming additives such as VC and LiBOB to improve its performance.
6. Introduction of Fluorinated Solvents or additives
Fluorinated solvents or additives are important materials for the development of lithium-ion battery electrolytes with high performance and special functions. There are 7 electrons in the outermost layer of the electron orbit of fluorine, which has strong electronegativity and weak polarity. Fluorine will reduce the freezing point of solvents, increase lightning, increase oxidation resistance, and increase flame retardancy, which helps to improve The contact performance between the electrolyte and the electrode, and is beneficial to the formation of a better protective film on the positive and negative electrodes. Therefore, the use of fluorinated solvents or additives in the electrolyte will effectively improve the low-temperature performance, oxidation resistance, flame-retardant performance, wettability and cycle performance of the counter electrode, and then obtain electrolytes with special functions, such as high Voltage electrolyte, flame retardant electrolyte, wide temperature window electrolyte, etc.
When used as an additive, the amount of each additive generally does not exceed 10 wt.%, and in most cases it does not exceed 5 wt.%.
For specific research and application examples, see the table "Research and Application of Several Fluorinated Electrolyte additives".


PREVIOUS：Introduction to the functions of three new ty No next