Highly regioselective electrochemical fluorination of 2-pyrimidyl sulfides having an electron-withdrawing group (EWG) at the position α to the sulfur atom was successfully carried out using Et4NF·nHF (n = 3, 4) or Et3N·3HF as a supporting electrolyte and a fluoride ion source in 1,2- dimethoxyethane (DME) in an undivided cell. 2-Methylthiopyrimidine devoid of an EWG was also selectively fluorinated in DME to provide 2- (fluoromethylthio)pyrimidine in a moderate yield as 63%, while corresponding 2-methylthiopyridine was less selectively fluorinated in lower yield along with α,α-difluorinated product. In contrast, the corresponding 2- quinazolinonyl sulfides underwent similarly α-fluorination along with unexpected ipso-fluorination through anodic desulfurization. 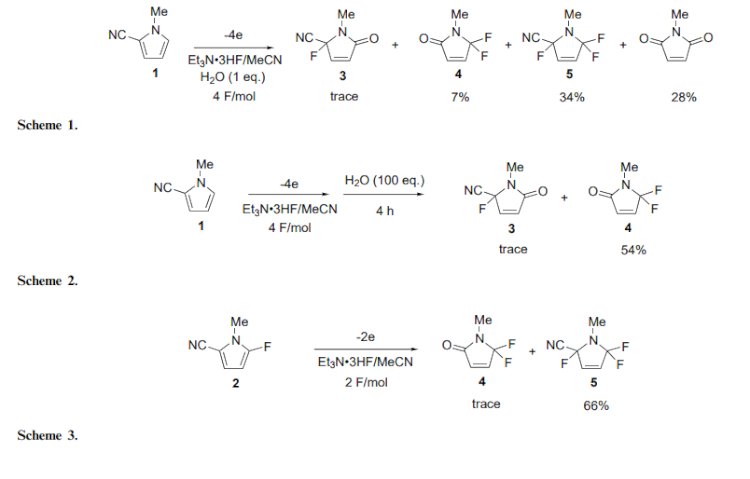 In conclusion, we have successfully carried out for the first time anodic fluorination of 2-cyano-1- methylpyrrole. The product 4 has a biologically interesting gem-difluoromethylene unit in the heterocyclic ring and 2 has also a versatile cyano group and a fluorine atom. Therefore, 2 and 4 seem to be useful fluorinated building blocks. Work on further application and the scope and limitation of the methodology for anodic fluorination is now in progress.