The commercially available Fluoroiodomethane represents a valuable and effective electrophilic source for transferring the CH2F unit to a series of heteroatom-centered nucleophiles under mild basic conditions. The excellent manipulability offered by its liquid physical state (bp 53.4 °C) enables practical and straightforward one-step nucleophilic substitutions to retain the chiral information embodied, thus allowing it to overcome de facto the requirement for fluoromethylating agents with no immediate access. The high-yielding methodology was successfully applied to a variety of nucleophiles including a series of drugs currently in the market.

Modulating critical physicochemical parameters of organic arrays through the introduction of fluorine-containing motifs represents an established tool in modern chemistry.(1) Accordingly, significant fine-tuning of metabolic stability and lipophilicity within the drug optimization process, inter alia, is achieved by exploiting some of the unique properties offered by embodying fluorine such as its small van der Waals radius (1.47 A)(2) and its high electronegativity.(3) Evidently, depending on the desired degree of fluorination of a given carbon skeleton, a multitude of synthetic techniques can be devised.(4) Although a plethora of methodologies have emerged for introducing polyfluorinated methyl fragments (−CF3 and – CHF2 groups),(4a,5) protocols for formally transferring the monofluoromethyl (CH2F) analogue—an isostere for CH3 or CH2OH groups—onto a valuable heteroatom remain still underdeveloped.(6) This aspect is particularly elusive when compared to the widespread relevance of this motif in pharmaceutics as illustrated in the cases of afloqualone, fluticasone, or sevoflurane inter alia (Scheme 1).(3,7) From a retrosynthetic perspective, the delivery of the formal electrophilic CH2F unit to the recipient nucleophile represents the conceptually simplest disconnection to achieve the goal.(8) Indeed, recent advancements indicate the versatility of hypervalent sulfur species as valuable transfer agents working under an electrophilic regime. A breakthrough in the field was documented in 2008 by Prakash and Olah through the development of shelf-stable electrophilic fluoromethylated diarylasulfonium salts capable of releasing the CH2F motif to various nucleophiles encompassing O-, S-, N-, and P- species (Scheme 1, path a),(9) subsequently extended to the transfer of −CHFMe systems by Besset et al.(10) Furthermore, Shibata introduced in 2011 sulfoximinium salts for accessing fluoromethylated aromatic alcohols and carboxylic and sulfonic acids (among other nucleophiles, i.e., enolates) (Scheme 1, path b).(11) Additionally, Lu and Shen designed more versatile analogues (sulfonium ylides) manifesting broader substrate scope, thus allowing the use also of aliphatic alcohols as competent nucleophiles (Scheme 1, path c).(12) Stemming from a radical pathway, Hu and co-workers demonstrated that N-tosyl sulfoximines could transfer the CH2F group to O-, S-, N-, and P-nucleophiles:(13) importantly, they documented the accelerating effect displayed by the α-fluorine substituent toward nucleophilic substitutions.(14) However, the multistep preparation of these fluoromethyl donor agents jointly with the nonoptimal atom economy associated with their employment tends to circumscribe the applicability to model systems of academic interest, thus making somehow difficult the routine access to fluoromethyl analogues of potential medicinal relevance. Remarkably, Hu proposed the gaseous reagent ClCH2F—Freon 31 (bp −9.1 °C)—as an effective solution for installing the motif on a variety of heteroatom nucleophiles.(15) Unfortunately, its physical state—gas—poses severe limitations for the experimental execution (e.g., impractical handling process amd imprecise measurements of small quantities), which ultimately lead to the eclipse of the innate synthetic potential of such an approach. In this context, the simple replacement of the leaving chlorine atom with the heavier iodine confers a dramatic enhancement of the manipulability of the resulting Fluoroiodomethane (FIM, bp 53.4 °C).(16) Aware of this practical advantage, our group conducted on it selective iodine/lithium or hydrogen/lithium exchanges en route to unprecedented nucleophilic fluoro-containing carbenoids for preparation, through a single synthetic operation, of α-fluoromethyl skeletons(17) or three-membered fluorinated rings (epoxides and aziridines).(18) Furthermore, recently the reagent is finding significant application in different areas of synthesis as showcased in transition-metal-catalyzed cross-couplings with boronic acids,(19) in Cu-catalyzed borylfluoromethylation of olefins,(20) in fluorocyclopropanations,(21) and in C-selective monofluoromethylation of β-ketoesters(22) and fluoromethylphosphonium ylides.(23) 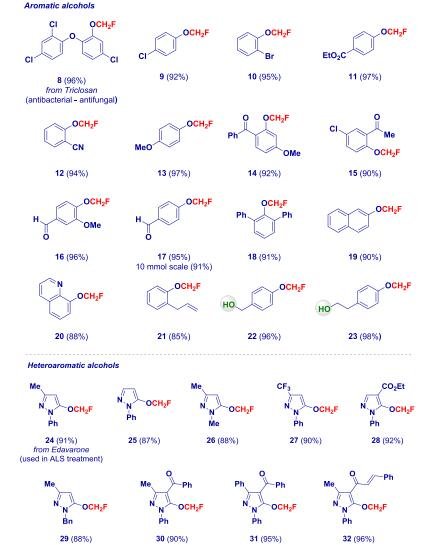 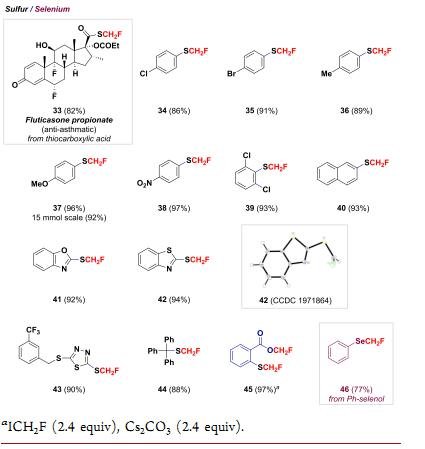